Home-made soup, there's nothing quite like a bowl of this stuff to stave off the winter chills and really fill you up.  Soup can be made very cheaply using leftovers and a few low cost ingredients, so it's a really excellent way to feed the family and stay within your monthly food budget.  I have some very fond memories of growing up and eating home-made soup most days.  I was the youngest in a family of seven and as you can imagine my parents had to budget very carefully.  Money might have been tight but we were always well fed.  There was always a large pot of soup on the stove and my dad would make a fresh batch every couple of days with vegetables from the garden. 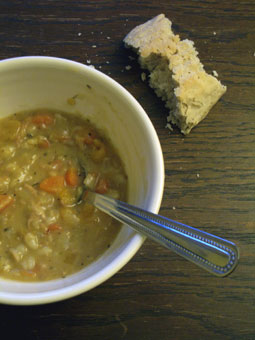 There are plenty of cans of soup on the shelves at the local supermarket that may claim to taste like real home-made soup, but there's absolutely no substitute for the real thing and it will definitely work out a lot cheaper in the long run.  In soup making there are no real rules and recipes can be modified and adapted to suit your particular taste.  I have provided below the basic method and some recipe ideas to start with.  From here you can use whatever you like, or whatever happens to be cheap at the time to make your real home-made soup.

The base of any good soup is a nice meaty stock.  You can make this from practically any kind of meat e.g. Chicken, lamb, turkey, pork ribs, ham hock, etc...  If you happen to have had a Sunday roast and there are some leftovers then this is ideal.  I've even made stock from a few chicken thighs and drumsticks before.  It's also worth keeping an eye open in the supermarket for a cheap cut of meat or small packs of meat that have been reduced.  They may not appeal as a dinner as such but might be just ticket for a pot of soup!

To make your stock simply boil up the leftover carcass in a couple of litres of water until any meat on the bones just falls off.  This will normally take an hour or two and can be a bit smelly so make sure there's plenty of ventilation.  Allow it to cool for a little while and then drain off the liquid into a suitable container.  The next part is a bit messy but worthwhile as there is quite often a lot of nice tender meat that can go into the soup.  You basically need to sift through the boiled up carcass and pick out any meat.  You can either keep this separate or with your stock as it will all end up in the pot eventually.  Allow your stock to cool completely then cover and keep in the refrigerator over night. In the morning you can then skim off any excess fat which will end up floating on the surface.  Your stock is now ready to use.  If you don't have any leftovers to make stock from you can always use stock cubes.  In fact I often include one anyway for a bit of extra flavour.  If you're making a purely vegetable soup then stock cubes are the way to go.

The next step is usually to get all the vegetables and pulses prepared.  Chop up your onions, leeks, carrots, cabbage, swede,  potato, etc...  As I said earlier, the choice of vegetables and how much to use is entirely up to you.  Rinse your pulses such as lentils and barley but bear in mind that if you are using certain broth mixes it may be an idea to soak them over night.  I have always found that when making soup with just lentils and barley, if you let it simmer a bit longer then it softens up just fine; split peas on the other hand do need to be soaked or you'll end up with crunchy soup!

OK, time to get that soup on the go!!  Soften up your onions (and leeks if you are using them) by lightly frying them in some olive oil and a little butter.  If you're using herbs and garlic then it's a good idea to add them in at this point.  Once your onions etc... Are nice and soft, turn the heat down and very gradually add in some plain flour whilst stirring all the while.  You're basically making a roux which will help thicken the soup.  Once the mixture is nice and stiff gradually add the stock.  Keep stirring as you add the stock and make sure the roux gets completely absorbed into the stock.

You can crank the heat up again, then chuck in your vegetables and pulses in any order you like because the soup doesn't care!  Bring the soup to the boil, then turn down and allow to simmer for at least an hour, stirring occasionally.  If your soup pot isn't particularly non-stick you might want to stir it quite frequently as you don't want it sticking to the bottom.  If you're cooking unsoaked pulses then by all means let the soup bubble away on the stove a bit longer until they're nice and soft.  Taste the soup every now and then, you'll know when its ready.  If you like a nice creamy soup add a little bit of single cream (or even milk) towards the end.  You can also add salt and pepper to suit your taste at this point.  I often don't though as people have their own ideas about how much of each they like and can do this themselves.  By the way, home-made soup is particularly nice when accompanied with some home-made bread or rolls.

Your soup will usually stay fresh in the fridge for a few days, or alternatively you can pour it into portion sized plastic containers and freeze them.  I have heard that soup will keep in the pot (covered) on the stove for quite a while as long as it is boiled each day.  I can't say that I'd be too keen on that idea personally and I tend to either refrigerate or freeze.  Back in my youth I don't think our soup pot actually had anything in it after the second day anyway, so keeping it fresh wasn't really an issue!

We'll add some more recipe ideas as we discover them. In the meantime if you've made any great tasting home-made soup then please feel free to share your recipe ideas with Saving Stuff and we'll publish them here!