Bread, the mainstay of your typical British lunchtime sandwich is becoming an increasingly expensive commodity.  I presume this partly due to increasing fuel prices or the global economy in addition to good old fashioned inflation.  Whatever the reason though the price of bread is certainly going up with the price of the average loaf costing somewhere between 60p and £1.25.  It used to be possible to buy a regular loaf of bread at the supermarket for under 50p (without resorting to the budget variety or the reduced to clear), but it would seem that those days are long gone.

If you think the supermarkets are expensive just take a look at the prices of bread in a traditional baker shop. Whilst its true you will find a great deal of variety and the bread will taste wonderful you'll probably have to fork out a bit more money for the privelege.  Well the good news is that you can have a wholesome loaf of fresh bread at home every day for around 20 to 25p, if not a little less. 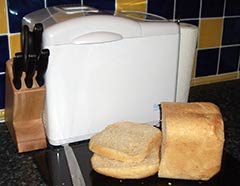 If you haven't guessed already this does mean that you have to make the bread yourself, but it's not all that complicated and with a bread machine it is almost as easy as making a cup of tea!  Bread machines aren't the cheapest domestic appliance you can buy although they are coming down in price.  You don't have to buy an expensive one to make good bread though and there are plenty of good machines for sale on eBay.  Better still you might be able to pick one up for free via your local freecycle.  Sometimes people acquire a breadmaker full of good intentions, they make a few loaves of bread and then the machine is resigned to the back of a cupboard where it remains unused.

If you don't have a breadmaker though you can always do it the old fashioned way.  Making bread by hand is a bit more tedious, especially making the initial dough.  I think you will probably find that the final results are well worth the effort though and there's nothing quite like the smell of a freshly baked loaf of bread.

Here's my personal bread machine recipe (see below).  Just add the ingredients in that order and then select your basic bread setting.  Most of the recipes out there say you should use only strong bread flour but I have found from personal experience (having run out of bread flour once), that you can use some plain white flour in the recipe and it actually results in a slightly lighter, fluffier loaf of bread.  This is good news because plain flour is actually a lot cheaper than strong white bread flour and thus helps it go a bit further.  Yet another way to save money on your bread!

You can use some powdered milk in the recipe or alternatively you can mix in some milk with the water if you are making your bread straight away (ie. not using the timer).  I've also made bread without milk and the results are quite satisfactory.  The sugar too can be left out with many of the fast acting yeasts.  With traditional hand baking yeast or fresh yeast however it is required.

I've been making bread rolls for the last year or so and have adapted my bread recipe for rolls.  I've actually been on a quest to make lovely light and fluffy rolls a bit like the ones I used to get from the local bakery in Scotland. There are a few recipes out there for Aberdeen morning rolls which didn't quite produce the kind of results I was after.  Most of those recipes used vegetable oil instead of butter and it just didn't work for me.  I discovered that a regular bread roll recipe adapted to use white flour produced the kind roll I wanted to make, not too heavy, quite soft and fluffy.

To make rolls you use the "dough" setting of your bread machine.  Once it has completed (usually an hour and a half), you turn out the dough, knock it back and shape it into 8-10 rolls pulling down the dough to make nice smooth rounds.  These are left in a warm place for 30-45 minutes to rise and then baked in an oven (Gas Mark 5, 190 degrees Celsius) for 20-25 minutes.

There's more to bread making than plain old white bread and rolls though.  You can use all different kinds of flour such as brown and wholemeal. With these you can create a variety of breads by mixing them.  The fun doesn't stop there though because there are plenty of recipes out there for speciality breads and fruit loaves. The list is quite literally endless and I haven't even scratched the surface yet myself.

One thing is for certain though.  Making bread at home works out a LOT cheaper than buying it in the shops! Another thing to consider is there is no waste with home made bread.  Shop bought loaves of bread are normally bigger and would normally sit around in the bread bin a bit longer with the result being towards the end it may be a bit stale and often end up being thrown out.  Yet another reason to save money and make your own bread!