The good old toolbox, the thing that lives in the garage or the shed (sometimes your car) within which you will find a myriad of wrenches, screwdrivers, sockets, spanners, nuts, bolts and other assorted hardware.  It's just a shame we have to spend the first 10 minutes of every DIY project sifting through the contents of that toolbox before we find the item we're after.  For some reason or other the toolbox tends to get a bit untidy and you quickly run out of space so that when a new tool is purchased finding a home for it can be quite challenging.  Here are a few suggestions which might help you organise your toolbox, free up some space and get those DIY projects underway quickly.

Start off with a decent toolbox to begin with.  I've had a number of them over the years myself and there's no substitute for either a multi-level expandable one or one with plenty of decent sized compartments.  Avoid the ones that have too few compartments because all the tools will end up in the bottom and apart from not being particularly space efficient, you'll have to drag everything out to find what you want every time.  It's no fun rummaging to the bottom of a box and grasping something sharp!  I'd also advise against the metal ones, partly because of the additional weight, but also because moisture is a fact of life.  It's metal and eventually it will rust - even if it has been painted. 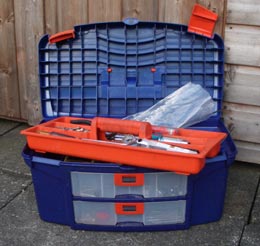 Get rid of any tools that are broken or have bits missing.  You're not going to fix them one day, they're going to linger at the bottom of the toolbox until it ends up in a skip somewhere.  Similarly, get rid of any tools that you really don't need; we've all got them and I'm as guilty as the next man of collecting tools.  Whilst we're getting rid of tools, have you borrowed any from friends and forgotten to return them?  Perhaps that's why you weren't invited out for a beer with the lads a few weeks ago.  Take that torque wrench back round to your pal's house with a few tinnies to say thanks!

Some items just don't belong in the toolbox.  Use some common sense here and find an alternative home for them.  That coiled up extension cable for example could hang on a hook in the garage and those paint brushes definitely shouldn't be in there.

Finally, take care of the little things and you'll have room for the big stuff.  You know, nuts, bolts, screws, washers, nails etc.  They can often be found rattling around at the bottom of the box or just chucked in there with the spanners.  Some toolboxes have compartments for this kind of thing.  Okay, sometimes they're just not big enough, so store them in an appropriate container instead.  A compartmentalised container specifically for nuts, bolts, nails etc. would be best, but another alternative would be biscuit tins or large ice cream tubs.  Don't forget to label them so you know what's in there before they go on the shelf in your garage or shed.